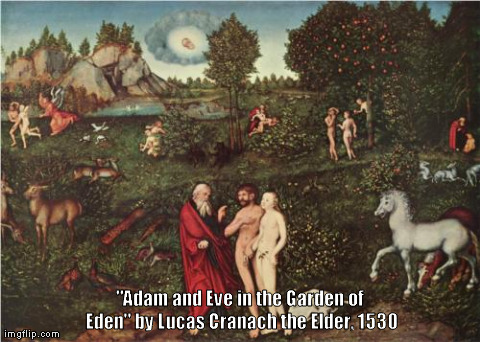 In “Speaker’s House and Destiny” (Chapter 11 of Messages from Estillyen), Reader and Voice examine why the initial act of sin—the small bite of one forbidden fruit—changed the course of history. One “small” sin unleashed the need for for Christ to be crucified. Wasn’t this an overreaction?

What is the power of one small act?

What is the power of one word spun out of control?

VOICE: Yet why such an extreme price for fruit plucked—a reach, a single breech of divine protocol?

READER: The fairy-tale portrayals of forbidden fruit, it seems, cheat the severity of the matter. The fall of Adam and Eve is not about the sound of crunch from fruit bitten. It is about the sound of words and a message believed. Grasping hand followed grasping heart. That’s the part that spun humanity into an inordinate orbit.

Ever so quickly words flowed into lines, inspiring thoughts and changing hearts to believe what should not be believed. That’s the way of words. Words jump into lines; lines jump into minds; thoughts jump into hearts. In the heart they vie for space with other words placed by other thoughts. Adam and Eve became sinners, new believers. They believed Satan’s words over God’s.

Do you get my point, Voice?

READER: Unlike in the vast abyss, the world reverberates with messages, attractive and alternative, pure and perverse, true and false. Messages come forth in words, images, and sounds. Into culture they float, playing games of tug-of-war. They pull at unbelievers to believe and beckon believers to disbelieve. They call out to buyers to switch and try to plead with pundits to place their bets.

To be “like God” was the pull of Satan’s line, spun so attractively for Eve. So wondrously autonomous, sovereign, and free—that’s the prize. Switch and try; change your vote; cast your lot. Grasp a bit of fruit; never mind, it’s really a bit of rope. Give it a tug.

“However, everyone is a believer—believing in this or that, or both. Disbelieving is a form of belief.” Do you agree?

“To be “like God” was the pull of Satan’s line.” How does Satan cast this line today?

“Grasp a bit of fruit; never mind, it’s really a bit of rope. Give it a tug.” What ropes are temping to tug, just a bit?

The Monks of Estillyen: always asking questions, always sparking thoughts. Have you met them yet?