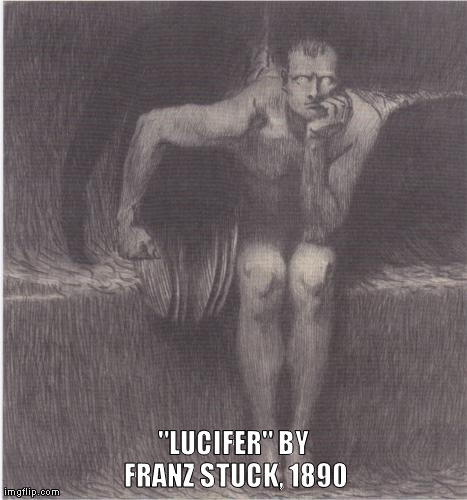 “In the beginning God created the heavens and the earth. Now the earth was formless and empty, darkness was over the surface of the deep, and the Spirit of God was hovering over the waters.” Genesis 1:1-2

God spoke order out of a void. To hear Satan tell it, though, God arranged a void out of order. In Messages from Estillyen, Lucifer expresses great angst over the state of the cosmos and God’s presence in it.

Lucifer: They’re no better than wayward fish, those fleshies. You wouldn’t expect the Word to become a fish, to redeem ornery fish, would ya? Of course not. He’s not gonna become a fish. Can you imagine that—putting on fish scales in order to ruminate and swim with fish? Putting on skin, flesh that came from mud—that’s no way to be reigning and ruling the cosmos. Do you see what’s gone wrong, my devotees? The order’s out of order.

John 1:14: “The Word became flesh and made his dwelling among us. We have seen his glory, the glory of the one and only Son, who came from the Father, full of grace and truth.”

Lucifer: The advent of fleshies has changed the cosmos. Eternity’s thorn they are. If I AM could just see the fleshies for what they are and pack it in, there would have been no need of reconstituting, or Magi traipsing around following stars.

John 3:16 “For God so loved the world that he gave his one and only Son, that whoever believes in him shall not perish but have eternal life.”

Lucifer: “Those dopes run around looking for hope. They’ll stumble right over that. The fleshies have caused so much cosmos consternation. It’ll take half of eternity for things to settle down, and even then it will never be right. If only I AM could turn back the clock, back to the days of pre-fleshy past. Back when eternity was eternity without this blasted time intrusion. That was the treasured age, free offleshy messes creating all these spiritual drafts rushing through the hemispheres.

Ephesians 1:4: “For he chose us in him before the creation of the world to be holy and blameless in his sight.”

Lucifer: God should be cosmos ruling, reigning, not be getting spiked on a cross and dying. I AM just got way too involved. He got in over his head. Who’s looking after the constellations?

Colossians 1: 15-17: “The Son is the image of the invisible God, the firstborn over all creation. For in him all things were created: things in heaven and on earth, visible and invisible, whether thrones or powers or rulers or authorities; all things have been created through him and for him. He is before all things, and in him all things hold together.”

Lucifer, always, spreads messages of deceit.  (“When he [the devil] lies, he speaks his native language, for he is a liar and the father of lies.” John 8:44)

Sounds like Lucifer is up to his old tricks. Fear not; the cosmos is under control–as it has been since the beginning.