Official News Release for ‘The Point’ 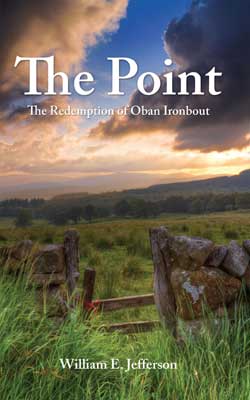 DALLAS, Texas, Oct. 3, 2013 – “The Point: The Redemption of Oban Ironbout” is unlike any fiction available on the market today. Its messages of redemption and the power of words seem to belong in the work of C.S. Lewis or J.R.R. Tolkien.

Author William Jefferson did not intend to write a novel. After a career helping to guide the communications of various ministries, including the Billy Graham Evangelical Association and The American Bible Society, he wanted to share what he had learned about the power of words.

Jefferson wrote 12 “readings” based on Scripture narratives. These readings, found in their entirety in “Redemption: Twelve Readings from the Monks of Estillyen,” focus on how God messaged redemption to the world. While Jefferson originally intended these readings to appear in a short theology book, he realized there was a greater story to be told.

The voice that emerged through Jefferson’s writings seemed to belong to a different era and a unique setting. He began to imagine a place of reflection and discussion overseen by an order of monks grappling with the same messages. Through the characters who surfaced in his imagination, Jefferson was able to say far more than he could ever hope to say without them, and his nonfiction theological treatise was soon being delivered through a fictional storyline.

“I was delighted to let the monks take ownership of my work,” Jefferson said. “The other Estillyen characters simply emerged, so that readers could go along this journey with me – the monks of Estillyen offering my thoughts as readings to be discussed in group settings.”

“The Point” tells the story of newlyweds Hollie and Goodwin MacBreeze, who travel to the Isle of Estillyen searching for meaning. There they encounter a magical world full of hope and timeless truths shared by an ancient order of monks.

Through mysterious circumstances, Hollie and Goodwin encounter a lonely recluse named Oban Ironbout. The MacBreezes believe that Oban is not past redemption, despite his gruff appearance. Through the readings provided by the monks, the young couple tries to introduce Oban to the hope they have found on the Isle of Estillyen

“Estillyen is a place where the pace of life slows down so you can really think about issues,” Jefferson said. “My hope is that readers will create their own ‘Isle of Estillyen’ – a place where they can stop to learn and listen. Estillyen doesn’t have to be a fictional place. The miracles of Estillyen can happen in each individual’s life.”

“The Point” and “Redemption” are available for purchase at Barnes & Noble and Amazon. Media interested in an audio news release on the point can find it here: http://www.icontact-archive.com/qK00MtAktlcjotRUQmFCp_RmDOzVepTc?w=3

For more information on “The Point” or “Redemption,” please visit http://alarryross.com/newsroom/the-point/.

Note to Editors: For a review copy of “The Point” or an interview with William Jefferson, please contact Katie Martin of A. Larry Ross Communications at 972.267.1111 or Katie@alarryross.com.