Chips and Nicks of Life! 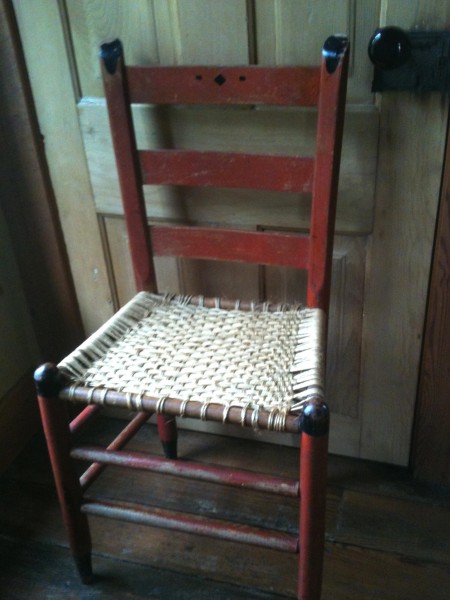 Chips and Nicks of Life!

That’s what Hollie Macbreeze thought, as she studied the primitive, painted chairs in the reading room of Three Pond Cottage.

Engrossed, she mused about all the chips, nicks, and signs of wear, adorning the charming red chairs. “Who sat in the chairs throughout the years?” She wondered.

She thought of aging. “What does life hold? Will I age?”

The following is an excerpt from Chapter 17, The Point: The Redemption of Oban Ironbout.  It’s Hollie’s reflection, as she struggles to come to terms with her incurable kidney disease. Starting at page 200.

“Oh, welcome. Please come in. My name’s Davyd. I’m just helping out at Three Pond Cottage today. I saw you from the side window. Say, your red jeans match the front door—nice.”

“Have you been here before?”

“Yes, once,” Hollie said. “We’re doing the Redemption our tenth reading. We can’t believe it. The eleventh will be at Speaker’s House on Saturday. Though…I didn’t think they had readings on Saturdays.”

“They usually don’t, but once a month they do,” Davyd said. “More people can attend that way.”
“I guess we’re supposed to take the twelfth reading with us,” Hollie said.

“That’s right. The monks incorporated that idea about ten years ago—sort  of an inducement for people to become readers, message makers, on their own. From what we can tell, it’s worked. The brothers get a lot of letters about groups gathering to do readings. Some of the readings have become quite popular as dramatic performances—lot of props and people involved. There are some that even incorporate music. Amazing, right out of Estillyen.”

“You seem to know a lot about Estillyen,” Goodwin said.

“That’s right. I do. I’ve worked for the monastery for thirty-eight years, keeping the books.”

“You’re right about that, young man. It’s really my life’s work, a calling. Can’t imagine doing anything else. Please, feel free to go on in.”

Hollie and Goodwin made two right jogs along the hall and entered the reading room of Three Pond Cottage. Rustic brick fireplaces centered the end walls, each with circular mirrors above. In the far corner sat seven young ladies eagerly chatting. Four were wedged together on a couch made for three, while two sat in tall, wooden armchairs with natural wicker seats. The posture and height of the wooden chairs made it look as if the two young women were coaching or tutoring the other five.

The seventh young lady sat in a coveted spot, a well-worn stuffed chair with wide, rounded arms. The petite miss sank so deeply in the chair she was barely visible.

In the corner of the room, two young men sat on an antique hard-backed bench. The bench was painted black and had faint yellow striping in relief rings carved into the top of each leg. Between the legs, flat wooden support braces carried the same ring pattern, with traces of yellow visible in the crevices.

Hollie and Goodwin were drawn to a pair of natural-colored wicker armchairs, and they quickly took their seats. The collection of varied chairs faced no particular direction. They were bunched together in small groups, as if the last occupants of the room had been engaged in little private chats.

Hollie became fascinated with six primitive chairs, all alike, which were grouped in pairs of three. Artistically, intuitively, she pulled away from the faces and voices in the room. Into her creative mode of mind she drifted. Meticulously, she studied the chairs, noticing the finest of details.

She thought, The chairs must be the work of an independent craftsman. The way they’re painted, a faded red with black accents. I just love the round legs, with their black tapered ends.

Carefully, she noted where the tapering started—some three inches off the floor—and how the diameter of the legs was reduced in half by the time the tapered ends made contact with the floor.

She studied the way the front legs were made, how they extended up an inch or so beyond the chairs’ twine woven seats.

She thought, The woven rope appears to be simple bailing twine—coarse and stringy. And the three simple slats that serve as backs—they’re ever so right, their symmetry.

Engrossed, she mused about all the chips, nicks, and signs of wear in the charming red chairs.

Who were these people who had sat in the chairs throughout the years? Where have they gone? Who was responsible for creating all the wear—the chipping of chips and nicking of nicks?

The chairs are so evenly primitive, beautifully worn and used. Not abused, but wonderfully used.

Hollie’s musing mind would not peel away to simpler sentiments.

The primitive character is a kind of fruit—days upon days stretching into age.

She thought of aging. What does life hold? Will I age? Will I be like the lady at the welcome desk, aging with an ageless face?

Age places acquired character upon the face. It’s much like the requisite wear upon the chairs. Without wear and use, they would not possess their lovely primitive distinction, their rich patina.

Somehow her train of thought shifted seamlessly to The Point and Mr. Ironbout. I see him standing in the middle of the grave plot, but sadly there is no distinction of grace upon his face.

Then Hollie heard a voice.

“Hey, Lee, the room’s filling up. Where are you? What are you thinking about? You seem a bit gone somewhere.”

“Oh, I was just observing those interesting red chairs and thinking about Mr. Ironbout. Do you think he’ll be aware of what’s going on today?”

“I hope so. I want to head over there as soon as we leave here, okay?”

“Certainly, let’s go. If he’s the old Ironbout, it’ll be interesting around there. He may demand release.”

Hollie was brought back to her previous thoughts. How true! I wish it were possible for me to meet some of the people who long ago passed by, taking their seats, lodging their nicks, and charting their chips. They must have been so full of life, so expressly present in the past, gifting wear to the chairs that now fill my gaze. Will I live to do the same? Will I be able to give worth to life? Will I be appreciated—and maybe even leave something to be cherished by others one day?

Goodwin again interrupted her thoughts. “There’s not a seat left,” he said. “Here comes the Reader.”

“Right,” Hollie said. “It does seem that all the chairs are full. I’m glad we spotted these.”

“Greetings, everyone. My name is Narrative. I’m your Reader for today, and I’m delighted to welcome you to Three Pond Cottage….