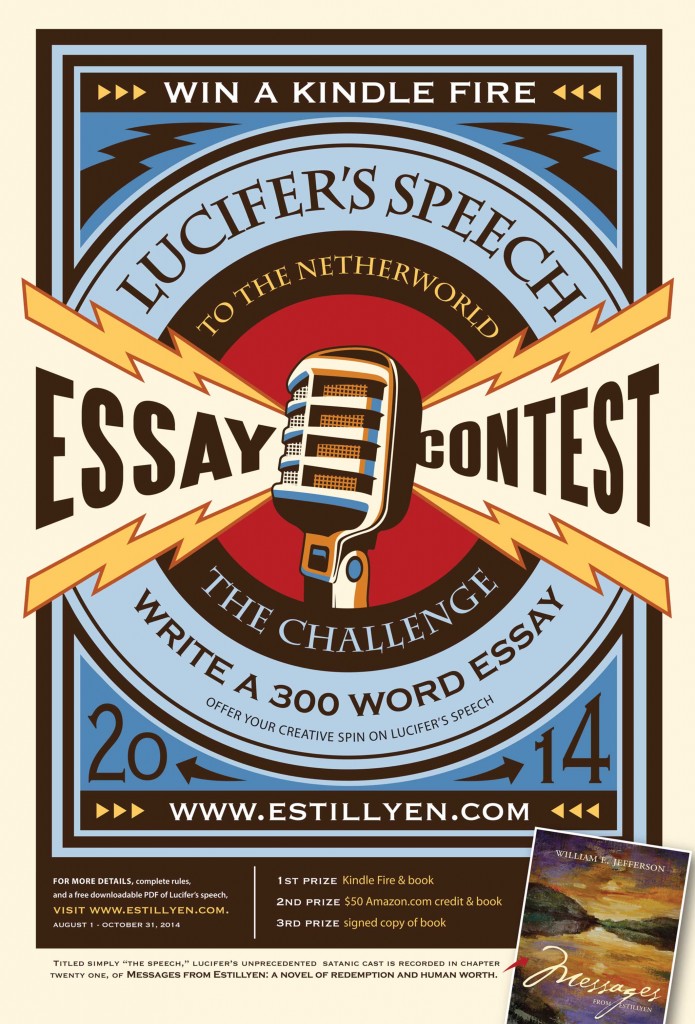 Lucifer’s Speech to the Netherworld featured in Literary Contest

Norton Shores, Mich., July 23, 2014—Port Estillyen Productions, publisher of Messages from Estillyen: A Novel of Redemption and Human Worth, announces an essay contest on the characterization of Lucifer in modern literary form.

Messages from Estillyen contains ten portrayals in which Lucifer imaginatively appears as a real-time observer of well-known Scripture narratives, such as the Transfiguration and the Crucifixion of Jesus Christ. Lucifer has much to say in his angst-ridden diatribe against God in his speech to the netherworld. Titled simply “The Speech,” Lucifer’s unprecedented address is found in chapter twenty-one of the novel.

Contestants are asked to write a 300-word essay based on Lucifer’s speech. Entries will be accepted until October 31, 2014, and the contest is open to everyone 18 years of age or older. Prizes range from a full-color map of the Isle of Estillyen to a Kindle Fire for first place. For more information, contest rules, and to download “The Speech,” go to https://estillyen.com/lucifers-speech-essay-contest/.

Messages from Estillyen is unlike any novel available on the market today. In it, author William Jefferson addresses God’s messaging of redemption throughout the ages from a vantage point that drives fresh perspective to the very marrow of human worth.

Messages from Estillyen received a coveted starred review from BlueInk Reviews, which says in part, “The author’s writing is skilled, poetic, and reminiscent of the classical period.

“This is a book to savor, not to gulp,” BlueInk contends. “The novel will appeal to readers who appreciate British wit, the skill of a true wordsmith, and the challenge of metaphysical introspection. Christian readers will be especially delighted by the creative way the author brings the Bible to life.”

The fictional characterization of Lucifer plays a major role in the novel and harkens back to the timeless writings of Dante, Milton, and C.S. Lewis. Jefferson depicts Lucifer as an omnipresent, evil predator that harbors unrelenting angst against God and his creation. Lucifer is especially distraught and anguished over the existence of the human race, which he refers to as “fleshies,” nothing but “mud cakes,” “the unfortunate by-product of I AM.”

Through the author’s creative portrayal of Lucifer, juxtaposed against selected Scripture narratives (presented as dramatic readings given by fictional monks on the Isle of Estillyen), Jefferson has managed to offer a fascinating perspective on the subject of redemption and human worth.

Barbara Bamberger Scott, writing for ForeWord Reviews, said “Jefferson uses carefully modulated language that often waxes poetic: ‘In the shadows between Scripture’s lines is God’s face. Like a full-faced moon on a meadow’s pond, it shimmers there.’ He also seems to recognize that some readers need their religious edification spiced with dashes of intrigue, love, and inspiration.”

Messages from Estillyen is available for purchase at Barnes & Noble and Amazon. A free chapter is available for download at https://estillyen.com/messages-from-estillyen-chapter-one-lunch-at-grims-park/.